In a recent posting we discussed “journey mapping” as a tool for improving customer experiences in the healthcare sector. This week, we share thoughts on “design thinking,” an approach that is described as “a human-centered way of...

In a recent posting we discussed “journey mapping” as a tool for improving customer experiences in the healthcare sector. This week, we share thoughts on “design thinking,” an approach that is described as “a human-centered way of...

Sainte Anne de Bellevue firm MaestroVision has won a contract worth nearly $120,000 to equip Longueuil Police with its state of the art audiovisual recording systems for its three interrogation rooms.

“The systems that we sell to police departments and to universities are all derived from broadcast technology,” MaestroVision video expert Michel Girard told The Suburban. “This solution is suited to those kinds of applications.” 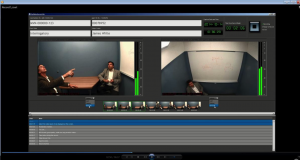 By indexing interview notes, the Quebec-developed technology makes it simplifies and speeds up the process of selecting salient portions of the recordings, enabling investigators to use the system themselves without having to rely upon a highly trained technician, added MaestroVision marketing director Maria Martinez.

“The interface is very easy to user,” she said in an interview.

The company has sold its systems to many police departments all over Quebec and has just made inroads into the United States, where it has an office.

“Lévis, Quebec City and [Canadian] Military Police are some of the police services that use it,” added Girard. “We just sold two in Florida. We also have people in Mexico.”

Subscribe to learn more about our news, events, products and services.

Join the hundreds of government and business entities benefitting from MaestroVision’s solutions.

This website uses cookies to improve your experience while you navigate through the website. Out of these cookies, the cookies that are categorized as necessary are stored on your browser as they are essential for the working of basic functionalities of the website. We also use third-party cookies that help us analyze and understand how you use this website. These cookies will be stored in your browser only with your consent. You also have the option to opt-out of these cookies. But opting out of some of these cookies may have an effect on your browsing experience.
Necessary Always Enabled
Necessary cookies are absolutely essential for the website to function properly. This category only includes cookies that ensures basic functionalities and security features of the website. These cookies do not store any personal information.
Non-necessary
Any cookies that may not be particularly necessary for the website to function and is used specifically to collect user personal data via analytics, ads, other embedded contents are termed as non-necessary cookies. It is mandatory to procure user consent prior to running these cookies on your website.
SAVE & ACCEPT